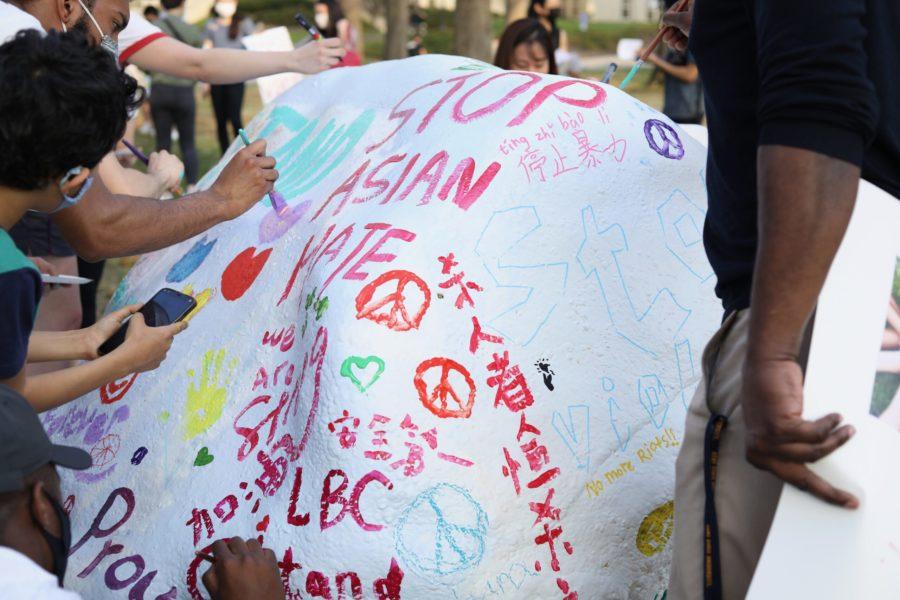 On a warm Wednesday evening, ralliers held signs saying “Hate is a virus,” “Stop Asian hate,” and “Unity against racism.”

Messages of love, anti-racism and unity were common themes among the speeches given at the Stand Together Against Hate rally.

People from Kent State and the Kent community gathered to show support against racism and discrimination toward the Asian community. The rally began with speakers from the Kent community and then moved to the Rock to paint “Stand Together Against Hate” and other anti-racism messages.

“The violent attacks against the Asian community propelled us to push together in a really fast way to try to come together and show support and to have our voices heard,” says Donna Lee, a piano professor in the School of Music and a member of Kent State’s Asian, Asian American, and Pacific Islander (AAPI) Faculty and Staff Alliance, which organized the rally.

Yuko Kurahashi, a professor of theater and member of the AAPI Faculty and Staff Alliance, says the United States has seen a 150% increase in reported hate crimes.

“We are here today to show our solidarity and commitment to fight against prejudice, bigotry and intimidation,” Kurahashi says. “By coming together, we gain strength and resilience, and our voices are heard louder.”

“It’s a tragic irony of recent times that these terrible moments are often when we see the best of humanity,” Malik says. “What specific things can we do and put on ourselves to try to understand the experiences of people who are different and to try to eradicate this hatred and violence?”

The rally featured musical performances from Kent State violin instructor Eunho Kim and ethnomusicology professor and director of Thai Ensemble Priwan Nanogkham. The Thai Ensemble is one of few academic Thai ensembles in the nation and features classical Thai piphat music. Nanogkham played a traditional Lao bamboo pipe called a Thai Khaen, which was met with loud applause from the crowd.

Senior ethnomusicology major Yuan Ni says she came to the rally to show support for her Asian community and to stand up against hate.

“Before [this rally] we also have Black Lives Matter, so we see how powerful [it is] when people stand out, to support each other and to get together,” Ni says. “So I feel like this is a way, like also for minorities, not only for actual AAPI people.”

Ni and her friend Qiaorong Wang, a senior music theory major, are both from China. They say they feel comfortable at Kent State and feel that it is an accepting environment for them.

“We are so lucky we are in Kent,” Wang says. “Other cities like New York City or Los Angeles, some places that they’re … very dangerous and not safe.”

Before the group made the trek to paint the rock on Front Campus, the Kent State Chorale Ensemble, directed by Scott MacPherson, sang “Find the Cost of Freedom” by Stephen Stills. The group’s powerful collective voice sent a message about what freedom means in the United States.

Dr. Scott MacPherson directs the Kent State Chorale Ensemble in an arrangement of “Find the Cost of Freedom” by Stephen Stills.

Ralliers walk down Main street from the beginning of the rally at the music field to the Rock to paint it.” PHOTO BY PEIYU LIU

“I was just pondering as I was listening to the speakers today,” MacPherson says. “We always say America or the United States, ‘land of the free,’ where we have freedom, but is it free when people can’t walk around safely?”

Dozens of members of the crowd joined to paint messages of love and anti-discrimination on the rock. Sophomore musical theatre major John Kraus led the painting of the rock, sharing his own experience of being a victim of anti-Asian hate.

“Around a year ago today, I was almost hit by a car by a person shouting racial slurs at me,” Kraus says. “So I urge you to support your Asian American and Pacific Islander friends because we are hurting … I worry for my mother. I worry for my grandmother, and I worry for my sisters … we must stand together against hate; we have to.”