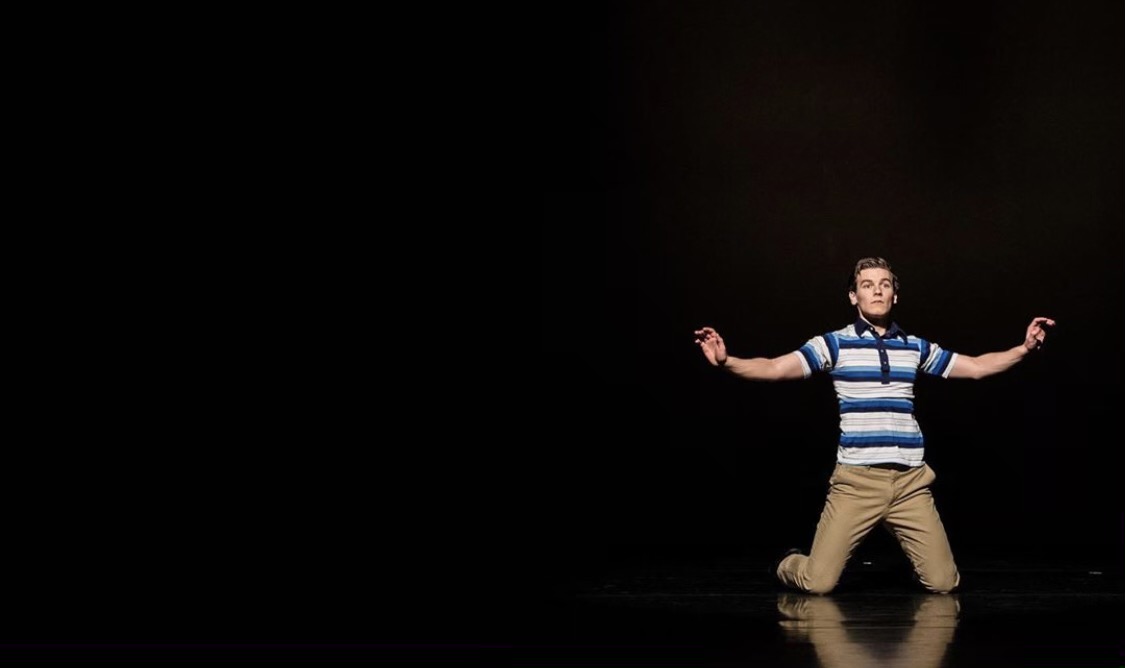 Robbie is originally from Pittsburgh, Pa., and a few of his hobbies include baking, reading, writing poetry and studying astrology. Fun fact: Robbie can read tarot cards! I have had the pleasure to get to know Robbie in the Kent Dance Ensemble and in dance classes, and he is such a fun person and radiates positivity. Robbie is truly an icon at Kent State!

Last week, I got the chance to sit down and talk to Robbie about what his life is like as a musical theatre and dance double major. As a junior, Robbie has a challenging course load consisting of a mix of dance, voice, acting, history and career classes. As you will see, his schedule is packed, but he handles it like a pro.

A Day in the Life

“My first alarm goes off at 7:50 a.m., bright and early,” Robbie says. After climbing out of bed, he packs his bag and prepares for a long day of dancing, singing, acting and studying. Leaving his dorm on campus, he takes his morning walk to the Center for the Performing Arts.

Then Robbie heads to a modern dance class. “It’s very intense,” he notes, “because you’re learning the modern techniques, but it’s also a full workout in class. This can be fun sometimes, because even though the professor pushes us to our extremes, he definitely wants to see us feel our best and get stronger as dancers.”

After a short break, Robbie attends his second class of the day: Musical Theatre Performance. According to Robbie, this junior-level class is a mix of all of the different skills musical theatre students will need to succeed in performance careers after graduation. In “MTP,” as he calls the class, they sometimes must prepare readings or even podcasts. They learn skills of the craft, such as how to do a live audition and how to act while singing. The other half of the class, he says, is about practical skills, from how to deal with taxes as a performer to how to find jobs online, record video submissions on camera and make a professional website.

“This class is as it sounds. We stretch and continue to enhance our techniques in jazz and tap and expand our capabilities. This semester we’ve been working on leaps and turns that are specific to the jazz and tap techniques, especially ones that you would see on Broadway, so a lot of crazy big fun stuff,” Robbie says.

After several back-to-back classes, Robbie finally has another short break. He uses the time to go back to his dorm and eat a snack or small meal before his evening classes. He cites fruit snacks and pretzels with hummus as his go-to options.

Jazz Styles III is the second highest level of jazz available at Kent. As an upper-division dance class, it builds on the fundamentals of jazz with more complicated techniques and combinations. They have learned four styles of jazz: commercial, contemporary, classical and Broadway. There is also a new element with Jazz Styles III: student teaching. Once each week, a different student teaches the class. Robbie says that “it’s a wonderful experience getting to learn from your fellow undergrads.” Robbie is teaching this week, and he has something extra special in store for his classmates!

After jazz, Robbie finally gets a longer break to eat dinner and relax. He typically meets with a friend for dinner at Eastway. He tells me, “We don’t get to see each other that much since now most of us are online for a lot of classes, so it’s always nice getting to see and talk to at least one friend a week.”

Robbie returns to the Center for the Performing Arts in the evening for Kent Dance Ensemble rehearsals. There are several dance pieces the ensemble is working on to prepare for the spring 2021 concert, so rehearsal consists of learning and fine-tuning those pieces. At the moment, the ensemble is also working on a virtual collaborative project with Tiffany Rea-Fisher, the artistic director of Elisa Monte Dance, a modern dance company in New York City.

After rehearsal, Robbie goes back to his dorm and takes a bit of time to breathe and de-stress before working on homework for his classes. Among other assignments, he has to score music and monologues, practice piano for about an hour each day and read two plays per week for Theatre History class. Finally, he heads to bed for some well-deserved rest.

Q: What is it that draws you to musical theatre?

A: I love being able to combine the elements of acting, singing and dancing, and I love how the combination of the three makes a story. A key part of musical theatre is storytelling, and I believe that everybody — no matter your sexual orientation, gender, religion, ethnicity — everyone has a story to tell, and it is so important to tell that story, because you are the only person who can tell your story.

Q: What is the hardest part of being a musical theatre major?

A: It’s the rigor of everything. Sometimes you have to allow yourself to have an off day, but you still have to be ready to go no matter what. Junior year for musical theatre especially is rough. You might walk into class one day and the professor will say, “Okay, mock audition, let’s go.” So you always have to be on your toes, ready to go.

Q: What has been one of your greatest successes on your student journey so far?

A: This is actually the turning point of when I decided that I wanted to pursue musical theatre as a career. My freshman year of high school, I auditioned for the school musical. I was kind of on the fence about it, because I was a freshman, and I wasn’t sure if I would be able to juggle everything. I auditioned for the musical and got the lead role. Coming into freshman year and booking a lead role was just so insane to me. Back in Pittsburgh, we do the Gene Kelly Awards, and I was nominated for and won best supporting actor for my performance. It was such an amazing experience.

Q: How has the pandemic affected your student life?

A: It’s definitely very different. It’s tough, because you’re not in a studio every day for musical theatre. Not including my dance classes, I’m in the studio for musical theatre classes at least twice a week. One is for an acting class and the other is for a singing class. It’s a more difficult process, because you can’t really learn how to act and sing over a computer. Then, when we do get to perform in classes, while singing we have to wear these big plastic face shields and all of the sound reverberates right back to you. It’s essentially like screaming up against a wall. But in the end, you take what you can get.

“The big thing I always tell people is that whether you’ve been in the performing arts, no matter what it is — musical theatre, acting, dance or even in the arts in general — no matter what you’re doing, there will always be times when you second guess yourself and second guess why you do your craft. But my favorite quote is, ‘You are enough. You are so enough. It’s unbelievable how enough you are.’ I follow that all the time. As artists, we are so tough on ourselves, because we always want everything to be perfect. We always want approval from a teacher, and we always are looking for that type of gratification, but at the end of the day, the only thing you have to care about is that you’ve done the work for yourself and that you’re proud of what you’ve done.”

Robbie is such an inspiration. Walking away from the interview with him, I felt so moved by his passion for the arts, his compassion for others and his positive outlook on life. You can see Robbie on (a virtual) stage in the School of Theatre and Dance’s December dance concert titled “Dance 2020: Virtual Vision” or in the Kent Dance Ensemble’s spring 2021 concert “Re-Emerge.” In the meantime, you can follow his journey on Instagram or Twitter @robayeee.

Sierra Severt is a freshman dance performance major with minors in arts entrepreneurship and professional and technical writing. She has been dancing since she was three years old, is a company member of the Kent Dance Ensemble and hopes to join a professional dance company in the future. Alongside her dance career, she loves reading and writing, and she aspires to write for a dance magazine someday. When she is not dancing, writing or studying, Sierra loves listening to music, doing yoga, baking and drinking chai lattes. This is Sierra’s second semester working for The Burr, and she is excited to see what opportunities this semester brings. You can follow her on Instagram @sierra_s__ or email her at ssevert1@kent.edu.

More in The Art Outlet