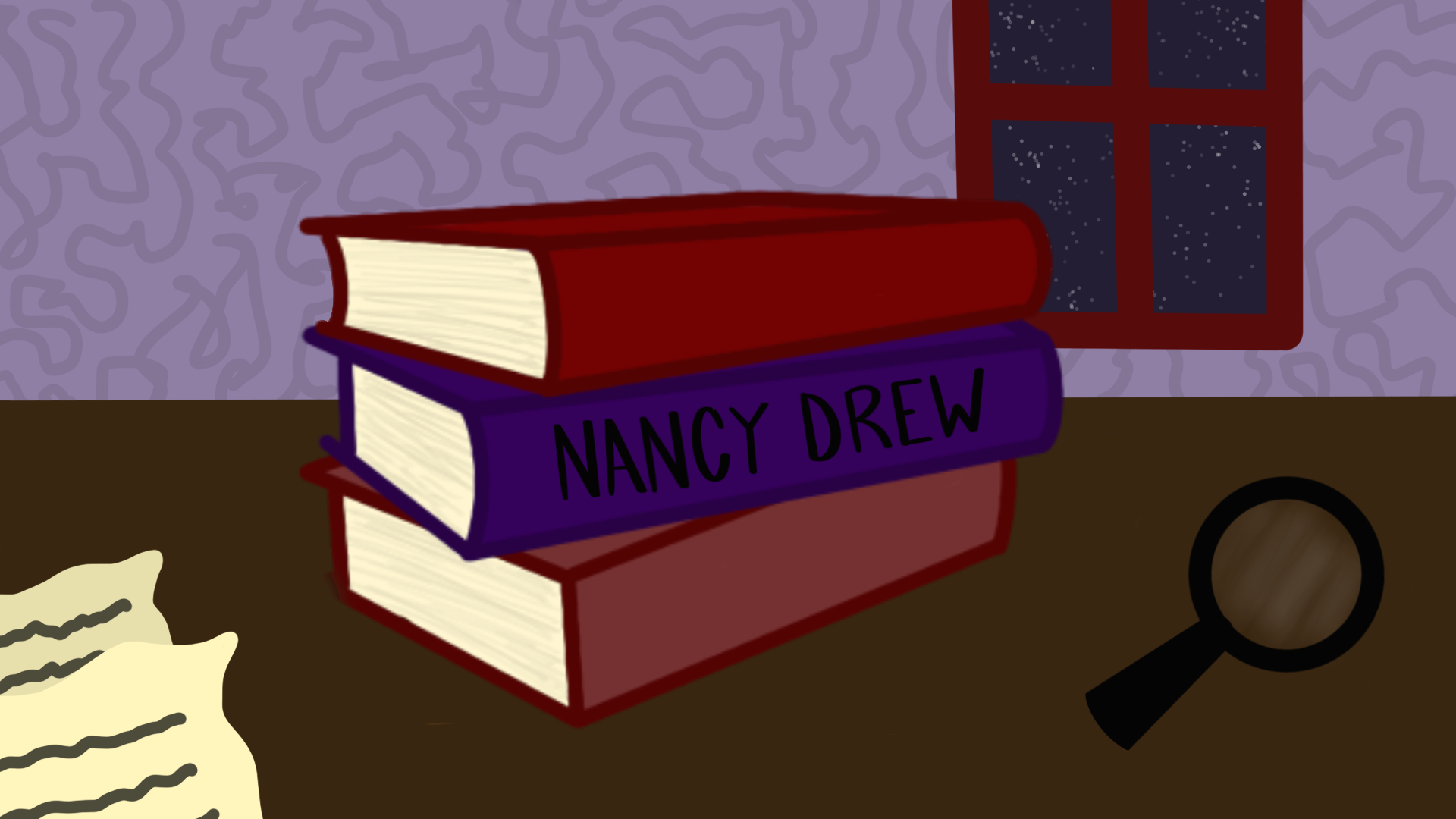 The character of Nancy Drew has been around for decades. As a child, I read countless books about the girl detective from different series. In addition, Nancy’s age changes throughout each one meaning there is a set of books for every age group.

This week’s blog will cover perhaps the most iconic Nancy Drew mystery: “Nancy Drew Mystery Stories #1: The Secret of the Old Clock” by Carolyn Keene. Similar to the last blog, there will be plot explanations and spoilers.

The novel was originally published in 1930. However, the same story was rewritten and published in 1959. Both versions list Carolyn Keene as the author, which has since been the pen name for anyone who uses the Nancy Drew character. According to the Los Angeles Times, the pen name was devised when author and editor Edward Stratemeyer hired ghost writers to write stories based on his idea of a teenage girl detective. The updated version of the story is what my mom passed down to me, so I will be referencing the 1959 plot. Even though this version of the story is more modern than the original, the older language and ideas presented throughout the story made this reread less enjoyable than my original time consuming the story as a child.

In “The Secret of the Old Clock,” Nancy’s adventure starts on the first page when she’s immediately pulled into two mysteries. One involves a band of thieves that has been secretly stealing furniture for resale by posing as movers. The other involves the wealthy Josiah Crowley’s missing will. While searching for a clue to discover the location of Mr. Crowley’s will, Nancy learns he hid a clue related to its location in an old clock. Inconveniently, or rather conveniently in the end, just as Nancy learns the clock’s location, the thieves posing as movers sweep in and steal it. Eventually, Nancy helps the police catch the thieves and discovers the location of the missing will. Mystery solved!

As far as physical readability goes, this mystery is perfect for readers who are new to chapter books due to the illustrations sprinkled throughout the book. The black-and-white drawings are not incredibly beautiful or detailed, but they do serve as an avenue to keep younger readers entertained. As an adult, it’s interesting to analyze the drawings more closely, as they represent the art and fashion of an older time period.

In addition to showing its age through the illustration style and content, “The Secret of the Old Clock” contains older vocabulary that puzzled me as a child. Some words that were common in the 1950s are not common today, such as specific words for equipment or clothing. Similarly, Nancy’s father is a lawyer in the novel, so even the mild use of law jargon added to my confusion when I was a younger reader. However when rereading now, I recognize most references in the story. The ones I don’t know right away are easy enough to understand using basic context clues. No matter the age of the reader, the sentence structure of the book makes for a very readable story despite the dated vocabulary.

As a child, the harm of these descriptions went completely over my head. Now, as an older female who has viewed both empowering and detrimental media, I clearly see the body shaming hidden within. With descriptions like these, the book is teaching young girls that being too fat or too thin is a negative trait that makes them a bad person. This is an old-fashioned and toxic mindset that should not be shared.

While Nancy Drew will always be one of my favorite childhood characters to read about, I wouldn’t consider the original story a very enjoyable reread. Even taking into account its time period and celebrated history, I believe more modern books featuring the girl detective are more empowering and uplifting than “The Secret of the Old Clock.” For those who are looking to read Nancy Drew novels to their children or even just experience their favorite childhood character again in a new way, I recommend the “Nancy Drew: Girl Detective” series.