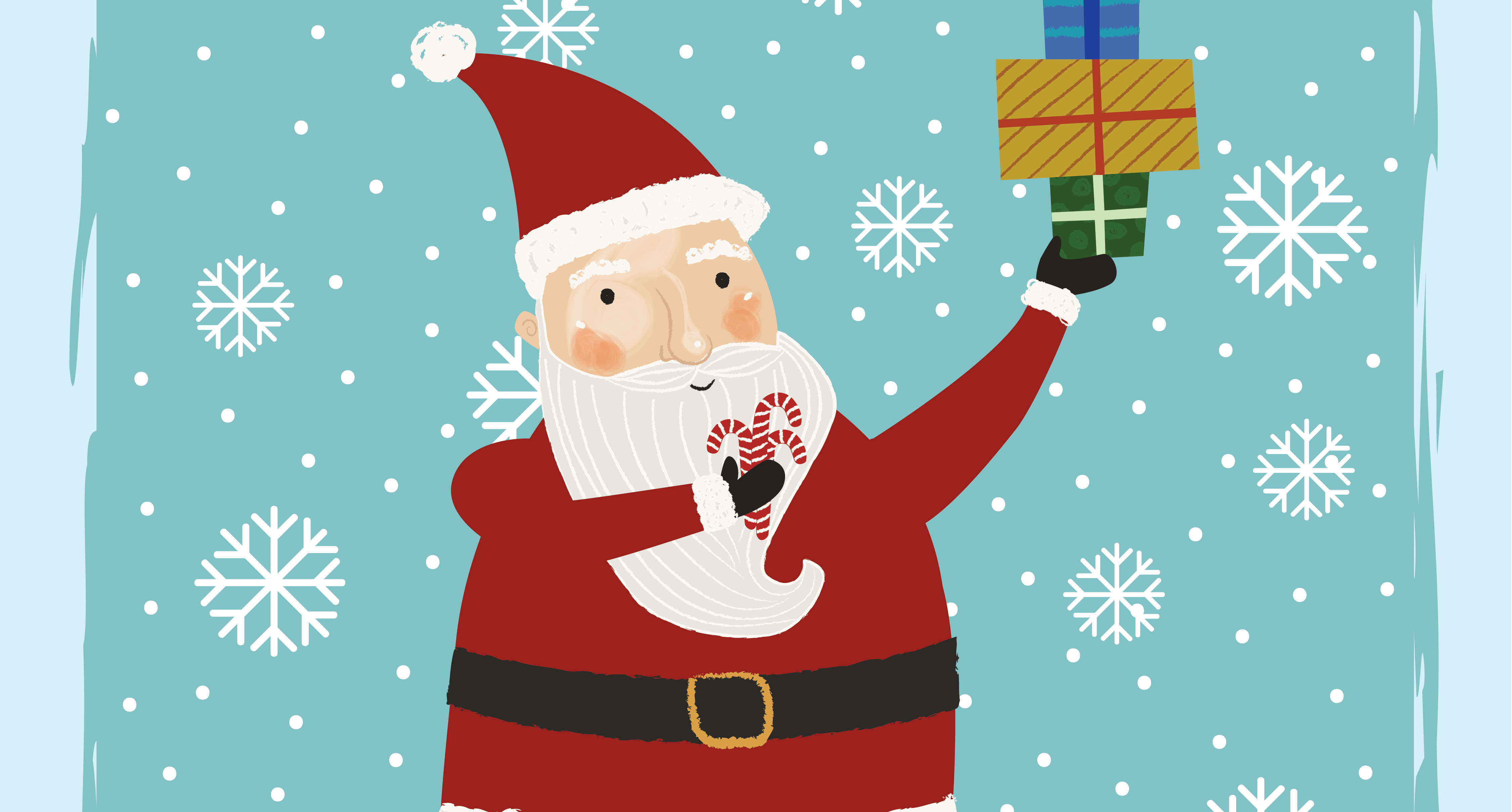 And so this is Christmas: another dishonest year culminates again in our annual celebration. It may not feel much like Christmas, but it’s important to separate reality from our subjective perception of it, like in the case of anxiety, for example. If you really need a reminder, look no further than The Beach Boys, who dutifully inform us every December that “Christmas comes this time each year.” This year I’ve been thinking: For too long, us halfway-intelligent people have refused to argue with the quarter-or-less wits who insist year after year that our beloved Santa Claus is somehow not “real,” as though repeating it makes it so. In general, it’s been the strategy to pat these little skeptics head on the head and send ‘em back outside to build a Darwinian snowman (you build a fishapod then sit and wait). Sometimes we even give the cynics a cookie, so they see why the Fat Man likes them so much. However, I think it’s time to switch up the script, and although a million unsourced variations on the “never argue with an idiot” quote tell us not to, we should probably offer to the Santa Deniers an irrefutable refutation so that they finally cease bloviating and start caroling.

Like any intellectual position — posturing, in this case — there are varying degrees of sophistication, but they all end up pretty much the same. With the Santa question, it reads, “It’s impossible because those things can’t happen, because they’re impossible.” Which is obviously arguing in a circle. You see, it’s all a justification, a rationalization, of a preexisting bias: a bias which asserts rather than argues that “Santa doesn’t exist, because that’d be magic, and magic doesn’t exist.” Therefore, rather than openly observing reality and assessing the evidence, these intellectually and imaginatively impoverished Santa Deniers proceed from a crude naturalism and attempt to shove all reality, in its infinite mystery, into their crumpled sweaty little pocket. Pure tragicomedy.

Even on the surface, it just doesn’t make sense. If Santa isn’t real, whom does Eartha Kitt so enchantingly petition for, among other things, a duplex and checks? The fledgling Santa Denier should really be quite careful of asking questions like this if he wants to keep living in la-la land, because once you get the ball rolling, it’s a short way to the obvious conclusion: Kris Kringle, the King of Jingling, is real. Any professed rationalist who denies this has abandoned reason entirely.

The Santa Denier will make you believe that he is on the side of common sense and that us Santa believers are the ones with the fanciful beliefs, but let’s dig into that. All we are making is one admittedly fantastic claim: that through the use of some magic which we don’t claim to understand, Santa lives at the North Pole and with his trusty team of elves, works hard at his workshop to provide toys for the well-behaved everywhere and delivers said toys via reindeer-sleigh sometime late Christmas Eve or in the early hours of Christmas morn. That’s it. That’s one claim about reality. Contrast this now with the paranoia and special pleading of those pitiless Deniers.

They’d make you believe everyone from Hasbro to Funko, Coca-Cola, Hollywood and the music industry are all in secret cahoots to scam us everyone, not to mention the years and years of folk traditions from various corroborating cultures. What does this remind you of? To me, it reeks of a musty Marxist base-superstructure boilerplate mixed with perhaps some deeper issue covered in the DSM-V. Yes, my Santa Denier friends, there’s a small cadre of suits at the top, and they’re pulling the strings, tricking over a billion people, just to sell Nerf Guns. Uh-huh. So nefarious is the global conspiracy, they even co-opted a saint, who encourages people to *checks list* “be good and nice.” Because that’s what the evil ruling class does. It is usually at this point in the conversation that you’ll want to slowly walk back toward the door, away from the bloodshot-eyed figure raving at you from across the table. But since I’m at the moment safe in my room, let’s press on.

More than just that inanity, Santa Deniers will make you believe that even your own parents are in on the conspiracy. When someone comes up to you and tries to convince you that everything you know is a lie and even your own parents are lying to you, it’s good to keep pepper spray on hand. Such is the attraction of cult leaders: “Don’t believe your lyin’ eyes, I have the REAL truth.” (Psychoanalytic time: is this a subjugated desire for them to actually be Santa, rooted in jealousy and impotence, which stem from a traumatic year on the naughty list?) As you get deeper, the absurdities stack up like gifts under the tree: that it’s actually your parents who drink the milk and eat the cookies (and occasionally take a bite out of the carrot), that the mall Santas are actually hired like whores and don’t report back to the North Pole, etc. I could go on, but frankly, it’s depressing me, and I don’t like to allow that energy during the most wonderful time of the year.

We could laugh. We could cry for them. I’m really not sure the proper response. It’s hard not to feel an acute sadness for such a deep delusion, but there are worthier causes for our sympathies at Christmastime: those forced to kick slush, huddled in the cold or who are alienated in other ways from their families, even separated from them by death or disease. To those lacking in material security, material security must be given, but both they and the materially-comfortable may also suffer from spiritual affliction, especially around the holidays, which can be a particularly painful time. This causes one to consider the origin story of our very fine and just festivities; a homeless king being born in an outpost somewhere at the end of the world.

To those suffering from destitution or depression, we absolutely must offer assistance, especially at Christmastime, but the Santa Deniers, smug fools who think science and dialectical materialism are who bring them gifts — well, they might just be beyond our help. There are many who even believe the story about the little town of Bethlemen yet still deny dear Sinterklaas. Not everyone who puts up a manger is a wise man; many are morons. However, jolly old Saint Nicholas would be glad to put everyone on the Nice list all the same, if only they believe. Don’t hold your breath. We live in a stupendously superstitious time, and people hold as fast to their illusions as a nervous mother squeezing her child’s hand in a parking lot. You can lead a horse to water and so on.

Before noted torch-singer and eponymous veal aficionado Frank Sinatra torched “Have Yourself a Merry Little Christmas” by mandating a lyric change on the grounds that the original, as performed by Judy Garland, was too glum, the lyrics were, “Someday soon, we all will be together/If the fates allow/Until then, we’ll have to muddle through somehow.” Muddle through this year indeed, but going forward, it’s time to part with such muddleheaded thinkers as those who would make us believe that a global economic and moral conspiracy, which has infiltrated even our own homes, is somehow more believable than Santa existing. There are more things at the North Pole than are dreamt of in their philosophy. Therefore, let us not bother anymore with the petty whining of the Santa Deniers, and instead turn our attention to more pressing topics: charity and joy and movies and cookies. As it stands now, the poor Deniers stand in a blizzard and watch the roaring party through a window. I have a feeling they will come in soon enough when they realize how fun it is. The door’s always open.