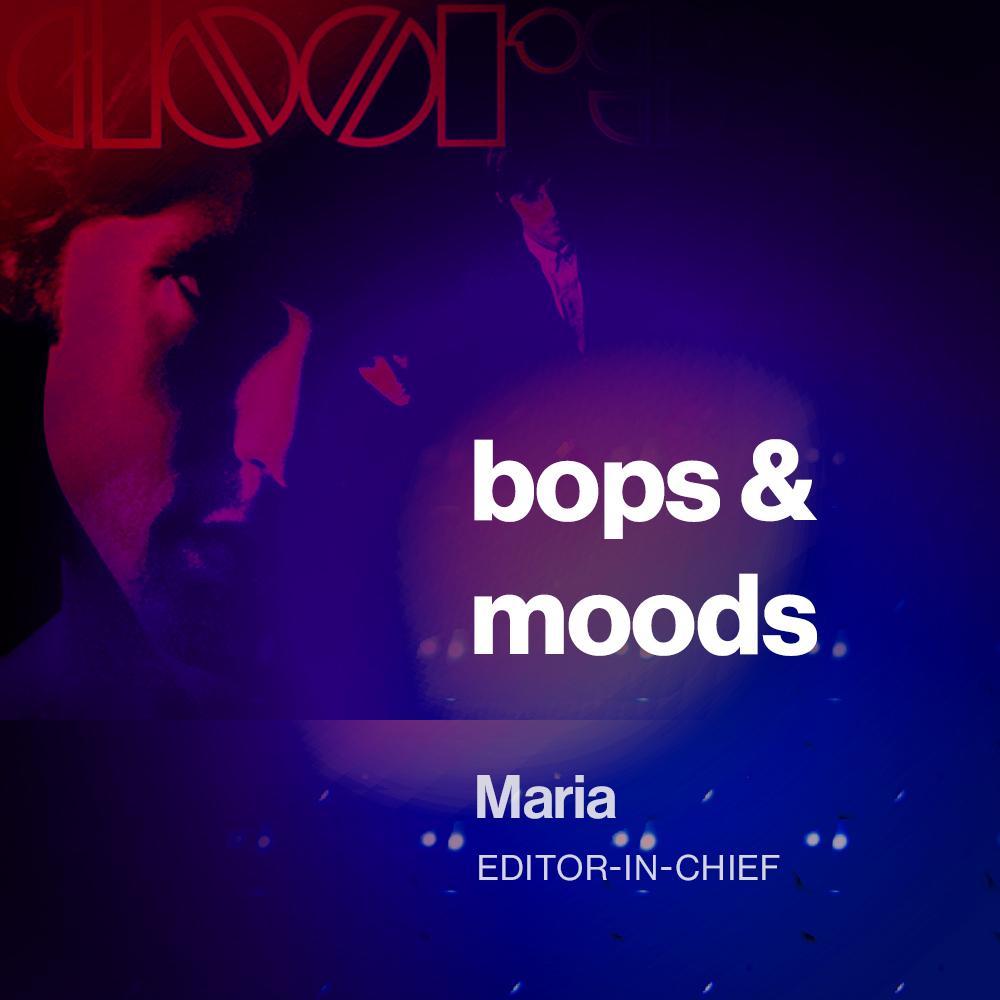 Narrowing my vast music library down to one playlist I wanted to share with The Burr’s audience was really hard. Musically, I dip my toes in everything but country (we will make an exception for Dolly Parton obviously, because she is an icon even if she didn’t make my playlist), so condensing that to 20 or so songs I felt hit the mark was really crazy to conceptualize. But I did it.

These are all songs that mean something to me in some way. Maybe they are tied to a memory or a person or just a generally good feeling and that is why they made the list.

Remember when George Miller went by the aliases Filthy Frank and Pink Guy and made raunchy comedy music? Well, now he is Joji, and this is completely different, and I love it. It’s moody, but it gives you this soft, chill vibe that fits the atmosphere of a party or just you vibing in your room alone.

“Just a Girl” by No Doubt

An iconic female-fronted group. This song just feels so accurate to society today, and it empowers me in a way. It is literally about being a female and being tired of the way the gender is continuously viewed as being meek. It’s 2020 and we’re over that.

“Hand in My Pocket” by Alanis Morrissette

“Jagged Little Pill” is such a killer album, and Alanis Morrissette is really one of the big female faces for the ‘90s grunge era. My mom introduced me to her as a kid, and I remember thinking she was so awesome for being on stage and playing guitar while she sang her heart out.

“Hold it Now, Hit it” by Beastie Boys

The Beastie Boys are one of my favorite old school rap groups. My mom is from New England, and we would visit family up there all the time, and the Beastie Boys just have that signature, nasally New England tone I really love.

“Killing in The Name” by Rage Against the Machine

If this song doesn’t get you fired up, I don’t know what to tell you. It’s about the revolution against institutional racism and police brutality, specifically in the United States. With the heavy guitar riffs and the politically charged message, it is so punk rock, and it is actually the song that made Rage Against the Machine more popular in the United Kingdom due to being played on the radio so much, which is pretty awesome too.

This song brings back so many emo vibes and Warped Tour memories. It reminds me of hanging out with my friends in the summer and screaming the lyrics at the tops of our lungs. “Ocean Avenue” is so iconic. I remember seeing Yellowcard at Warped Tour, and they had someone on stage playing the violin section. I mean come on, it doesn’t get much cooler than that. I wish Yellowcard never broke up, but it’s okay.

I really love this song. I feel like it is relatable and honest, and sometimes, that is lacking in popular music. It is reminiscent of Alanis Morrissette’s style at that time in the mid to late ‘90s and is often confused as being her song, but regardless, they are both crazy talented women.

“It Ain’t Over ‘Til It’s Over” by Lenny Kravitz

Lenny Kravitz? So cool. I used to jam to “American Woman” as a kid, but I love this song in particular. It has a really signature beat and is such a soft jam. I can easily play it anytime and be happy to hear it.

My dad showed this song to me as a kid. It is one of his favorites and mine too. I can remember riding in his car and singing along as loud as we could. It has such a whimsical sound, most of ELO’s songs do, but it can transcend you if you let it.

“Banana Peel” by Olivver the Kid

I stumbled across this song on Instagram and totally fell in love with the entire album. It kind of slows everything down and makes you think and feel, which I think is something I often avoid. But when this song plays, there is really no choice. The whole “Ego Surfin” album is fantastic.

I think the first time I saw Cane Hill live was at Warped Tour with my friends in 2017. Since then, we have seen them three times. The last time we saw them in 2019, I actually got a concussion in the pit, which really sucked, but now it is just a ridiculous memory we all share together. Cane Hill has a really unique sound that tends to change on every album, and it is exciting to see what they are going to do next.

“Edelweiss” from “The Sound of Music”

Anyone that knows me knows I absolutely love musical theatre. I have a lot of favorites, “The Sound of Music” being one of them. I was actually named after Julie Andrews’ character, Maria, which is so cool. Thanks, Mom and Dad.

“Self Care” by Mac Miller

I have loved Mac Miller since I was in sixth grade, so when he died in 2018, it was honestly heartbreaking. It was hard choosing one song of his to feature, but I chose “Self Care,” because the “Swimming” album was such a pinnacle point in his career, and he had so much more to create. His posthumous album, “Circles,” is really good too. It is unfortunate he is not here to experience fans still enjoying his music, but I am glad his estate knows how important it is to share the art he hoped to get out there.

I have seen Neck Deep in concert a ton of times. They are one of my favorite bands from the pop-punk genre. They are slowly starting to become a little more mainstream, which makes me sad because it feels like when that happens, the quality of the music starts to deplete (Panic! At the Disco, Twenty One Pilots), but I will keep holding out for them, because they bring back so many good memories with friends.

“Soul Kitchen” by The Doors

Jim Morrison was such a gem. I could go on forever about The Doors. Their sound is so unique, their music is basically poetry and they all just looked so cool when they performed. They have been one of my favorite bands for a long time.

“Gravy for Pope” by Yung Gravy

Yung Gravy is so ridiculous, but it is that fun, dumb music that you can bump to with your friends. I have seen him in concert once, and it was pretty cool. He is just making fun music for you to sing along to with your friends and as far as rap goes, his sound and samples are undeniably unique.

Ari is an icon. I was never too into her music until recently when she started to step away from the manufactured pop star facade and actually started writing and performing the music she wants to. I am a huge fan now, and this song is such a bop.

I know the Red Hot Chili Peppers often just sing about California, but I have been a huge fan pretty much my whole life. My first album I ever received as a birthday gift when I was a kid was the Chili Peppers’ “Blood Sugar Sex Magick” album. My family was trying to get me in tune with good music at a young age, and I think it worked pretty well.

“Love on the Weekend” by John Mayer

You can never go wrong with John Mayer. He just gives you easy listening. This song reminds me of the way it feels when you are driving down a long, open back road in the summer with the windows down, wind tossing your hair and the music turned up loud.

My dad loves reggae and plays it all the time. I enjoy it too, and this is kind of a nod to that. Sublime is not the most genuine reggae, they basically just feature the undertones of the genre, but I still love this song.