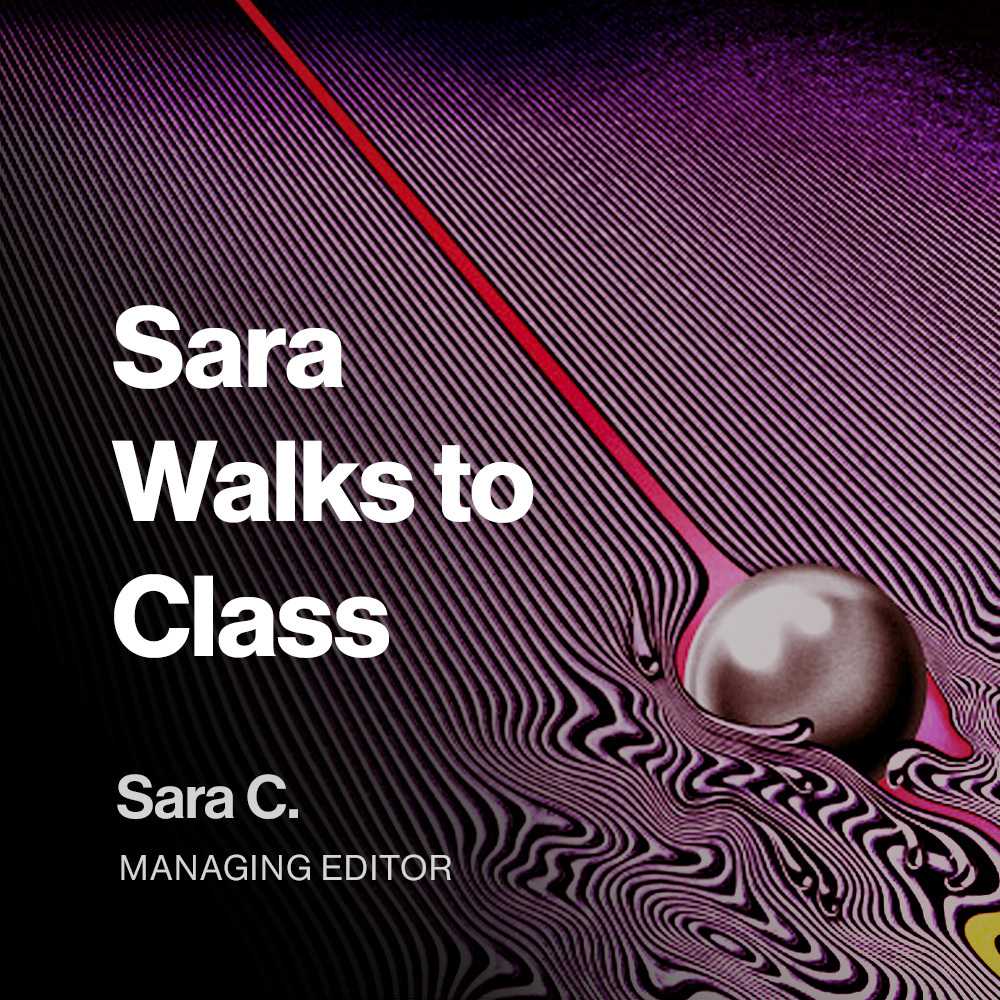 Walking to class, I cannot stand not being able to listen to anything. Whether it’s a new podcast or some of my music, I have to have something playing to keep me moving and not bored as I walk from place to place. On top of finding something to listen to, when it comes to music, I often can’t stay on one song unless it’s the perfect “walking” song, so this playlist is a compilation of all the good walking songs I listen to during my daily walks.

Foot out the door, the first song I choose every time has to be “Mr. Blue Sky.” The upbeat notes immediately flowing through my headphones change any bad day into a “blue sky.” It adds a little jump to my step and makes everything okay. The instrumental to “Mr. Blue Sky” makes the song, each section being unique and just as good as the last.

“The Less I Know the Better” – Tame Impala

Maybe it’s stereotypical, but Tame Impala’s “The Less I Know the Better” is definitely a bop and a half. The consistent beat keeps me moving and makes me feel like I am in a whole new world. While the beat stays the same throughout the song, it’s not monotonous and completes the walk.

Harry Styles. That’s all I can say. In all honesty, all I really can say. Such a beautiful voice, especially at the bridge. I just fall in love every time. What I would give to just be a part of that chorus and be in the presence of Harry Styles. Also, important. Treat people with kindness like he says to. A good message.

“Bennie and the Jets” – Elton John

Don’t ask me why, but I am just now really getting into Elton John and all of his music. I found one of his albums on vinyl over the summer, waited until Christmas when I got a record player and started to listen to him, and I honestly haven’t stopped. “Bennie and the Jets” is definitely one of the first songs I fell in love with by Elton John, especially that “B-B-B-Bennie and the jets” line. MWAH.

Short and sweet, “Rich Girl” quickly has become one of my most played songs. My favorite part of the entire song is twenty seconds in, as the intro leads right into a smooth drop, bringing it straight into the chorus. I greatly appreciate the climb (shout out to Miley Cyrus, I am sorry you aren’t on the playlist) throughout all music, and “Rich Girl” shows it perfectly.

After a long stressful day, “Canyon Moon” helps alleviate any stress through the whistling, the smooth guitar and the calming voice of Harry Styles. It makes me feel safe, like I am curled up in my bed with no worry in the world.

Shoutout to Jeremiah the bullfrog is all I can say. This song brings back lots of late-night memories of my current roommates and I sitting in the CUE at probably 2 a.m. yelling “Jeremiah was a bullfrog.” It definitely became a big part of our spring semester last year, and part of this year, and it always brings a smile to my face. Especially when it comes to Jeremiah.

The first thirty seconds into “Sunday Morning” makes this song one of my favorites by No Doubt. For the longest time, I didn’t give No Doubt the chance they deserved until my boyfriend would play their album Tragic Kingdom in the car and I quickly fell in love with the music. “Sunday Morning” definitely makes me want to jump everywhere I go, jamming out. Also that ending? Speechless.

“Honky Cat” makes me want to go for a stroll, my hands in my pockets, just leisurely walking. I’m not going to lie, definitely originally listened to this song as I was exploring Elton John’s music because of “cat.” On the other hand, I keep playing it and it is at the top of my “most repeated” playlist on Spotify, so maybe the “cat” helped me appreciate this song more.

Another song courtesy of my boyfriend’s endless albums and car jams, “Everywhere” has become a favorite of mine. It definitely makes me want to break out some dancing shoes and flow everywhere (aha). A perk of this song is having the image of having this sung to me as I sit in the passenger seat of my boyfriend’s car, but that’s just me.

One of the best feelings is to crank up your music and act like you are in a music video, but how much better would it be to act like you are in a whole musical? “Another Day of Sun” from “La La Land” has definitely been repeated over and over again on my Spotify. Whether that is when I am walking to class, taking a shower or just in my room when I want to act out an entire dance scene on my own (it’s a pretty fabulous scene in my room, if I do say so myself).

I do have to admit, I fell in love with this song through “Mamma Mia!”, but I still love this song with so much of my heart. The duet is key. I am probably going to make someone do this duet with me, not like an official, crazy duet, but one still. The key changes? Beautiful. The lyrics? Beautiful. ABBA? Beautiful. I also have been typing this paragraph out to the beat, so I think it applies to the playlist pretty well.

After finding COIN from their self-titled album, I fell in love with them, but it wasn’t until “I Don’t Wanna Dance” that I fully committed. It quickly became one of my favorite songs by them, and walking to class, I definitely get there a little faster because of this song.

Davy Jones from the Monkees was most definitely my first crush. My parents introduced me to the show when I was in elementary school, and I fell in love with the music, the band itself and the TV show (and Davy Jones). While there are definitely more “walk-worthy” songs throughout their musical journey, “Daydream Believer” still remains one of my most played songs, I just have to be careful not to sing along.

“Burn the House Down” – AJR

Hitting the chorus, the beat guides my footsteps as I walk. “Burn the House Down” is definitely a song that takes over and influences the way you feel, the way you react, the way you walk. I had the opportunity to see AJR live this fall, and mind you, freezing as it was outdoors in October, this song still kept me moving, and maybe even a little bit warmer.

Another COIN song that helps me get to class faster, “Crash My Car” has become a personal favorite from their new album, “Dreamland” (go stream it). My favorite part of the song has to be the last minute, with the slower lead into the chorus again. COIN has been a favorite since my junior year of high school, and look at us now in my junior year of college.