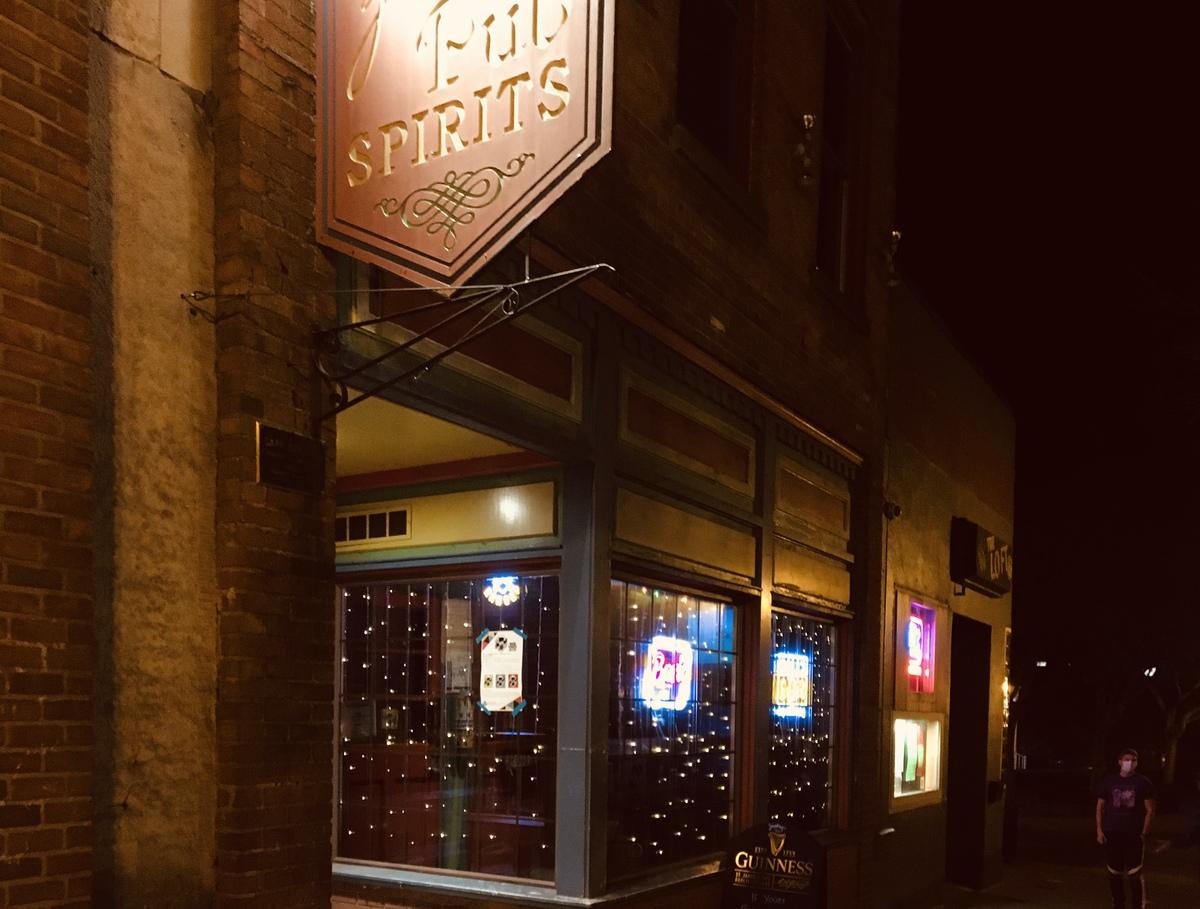 Research for the following was performed with the utmost journalistic integrity and commitment to safety and truth.

In the warmer months, it’s nice. You can get a pitcher and sit out on the patio. So during an airborne pandemic, if you must go to a bar, a nice patio like Zephyr’s is perfect. But then it gets cold, and there’s virtually no seating inside, except for upstairs. There’s good beer, good cocktail pitchers and always one or two old dudes seated in the corner of the bar. You might see them and think briefly of Bukowski, then retire to the bathroom and read above the urinal in neat black lettering, “I LOVE RIM JOBS” amidst “Shut up nerd” which is underneath “Don’t Vape,” all next to a damn impressive drawing of Rick Sanchez. Some of the staff have a tendency to confuse themselves with Seal Team Six, but the Greek name of the place makes up for it. Zephyr. A soft, gentle breeze. Really fits, if you think about it.

Home of “the Hulk”: that green potion consisting of some alcohol and some pop. You may watch it being made hundreds of times but can never recreate it. Not really. Lacking the secret ingredient (love?) perhaps? It comes in a chilled mug, which, for a while, in all its medieval glory, was replaced by a red plastic cup. The mugs are back now, and peace is restored to the land. Local legend has it that tiny elves sprinkle maple syrup on the floor before opening, and that’s why sometimes your shoes get stuck to the floor. I, for one, find the stickiness endearing.

It’s where you’d be glad you went after needing a cool drink from driving all day night to get away from the ghosts of your past, all those Springsteen-ian dirt roads and creaking white porches. It’s where in Kent Auden would’ve written “September 1, 1939” and then left as people arrived. With a surprisingly good draft list and wooden everything laden with vintage decor, The Loft is the crème de la crème of Kent bars. The vibe in the basement is part zombie apocalypse/nuclear fallout colony and part “Good Will Hunting.” It’s better upstairs except for the bathroom, which lacks a mirror and has always just been visited by one suffering from the stomach flu.

The best places tell you exactly what they are, like that place in Streetsboro, Fun Buffet. This is a tavern on Water Street and tied for the best Long Islands in the 44240. You now must be waited upon and are no longer allowed to go up to the bar and be jostled by the guys around you, but this is probably a good thing. The food there looks delicious, but you never get it. Either the kitchen’s closed, or you know what, you’re not that hungry actually. Next time, you’re getting it though. With its Kent State scoreboard and tile floor combo, Water is fun. Rum and cokes, fish bowls and Golden Flashes. Great place.

The unequivocal worst bar in Kent. If this is “your bar,” you un-ironically think last night was a movie. It has kind of a night-club aesthetic, but underneath the NYC pastiche, it’s scuzzier than anywhere. You can take a totally original fun pic in front of the “You up?” sign. That’s about it. Reprehensible management. Obnoxious clientele. 157 is what you’d get if the phrase “Try Hard” sold, well, vodka and sushi. People standing in a long line just to get in causes one to fear for the future of our republic.

Dom’s is pretty cool. The pool tables give it that “dogs smoking cigars” atmosphere, which is enjoyable. There’s a great drink selection but always served with a scowl. You can live with that. Nice patio outside. Really just a great aesthetic inside. But the music: I’ve heard, like, nu-metal, out on the patio. The music is rough. And the men’s room is in just about the most inconvenient spot possible. But Dom’s is a good place. Would recommend.

Let yourself feel the gravity of that article: THE Pub. There is no other. The Pub is peak chill. This is probably owing to the clientele, most of whom voted Humphrey in ’68, with a small minority who abstained, rejecting electoralism and all its false promises. Anyways, listen, I know you’ve been told since childhood that you have an “old soul.” I know the rabble deeper downtown can prove a bit much. But you can’t go to The Pub. They may even be glad of your business. (I have yet to experience this.) But you can’t go to The Pub unless you are not now or never have been a Kent State undergrad. Just as Paul McCartney wrote “Give Ireland Back to the Irish,” we need to preserve The Pub for old people. The place has been there since 1897. It’s the safe-haven. Good place, though.

Tied for the best Long Islands in the 44240. Probably the best bathrooms, too. Definitely also the place to go before a final exam, as the December snow is “falling faintly through the universe and faintly falling” and an older gentleman in a booth eats with relish his hot dish. Friendly staff. Excellent draft list. A table upstairs by a window near the bar is the best place to be. Ray’s has been around forever and is just about synonymous with Kent.

The true crossover restaurant-bar. At present, they’re already decorated for Christmas, which is regrettable. Other than that, Panini’s is nice. Sure, the menu is good and quite large, the outside bar and patio are comfortable, especially when the fire is warm, but listen: the bathrooms. You’re not going to find a more satisfying bathroom until Stow. (If anywhere, maybe Starbucks). Good food, good drinks, friendly staff. A Blue Moon, you find, is at its best when served here. But a word to the wise: you may get ditched on the seventh tee-box, because she’s “with her friends who can only visit once a year,” and they “don’t wanna sit around while you play Golden Tee,” so you’ll have to “meet (them) at Barflyy.” This kind of talk can turn a gentle fade into a nasty slice. Get your head in the game, soldier.

They should remake the book, “The Five People You Meet in Heaven” into “The Five People You Meet in Line for Barflyy.” Pre-Apocalypse, there was frequently a fun line. Barflyy is a cool concept, with the vintage games and all that. Obviously, a place to end the night, and a place to end the night exclusively. The look of manifest disgust on one cop’s face, whom you passed on the way out many moons ago, as a couple stood entwined a foot from his handgun, is worth the price of admission. And you can check your coat; that’s pretty cool. Well-decorated, too.

Featuring an inconveniently placed, piss-poor potty. But I repeat myself. Their food has saved many souls over the years. A potential night-starter and finisher. They charge you 50 cents for mayo. What’s up with that? The JoJos are pretty good. One time, they let some thrash metal band scream into the mic the duration of your stay, and you’re still not sure if you can forgive them for it. You also harbor reservations about the cleanliness of the kitchen, but acknowledge this is probably a “You Problem.” Euro is pretty cool.

Ah, Brew. You’ve been meaning to get back, but alas. What can be said? Kent’s only 18+ bar. It’s cheap. You’ve been to see her a couple times, but it’s years since then. Your time together was brief, but the memories remain. If only she wasn’t so far away. You hope she’s doing well. If memory serves, there was popcorn and a stripper pole.

God-tier service, cherubim-tier food. Maybe even seraphim. Always good stuff on draft. Margaritas, too. The painting on the walls: it’s not gaudy, but you might find yourself desirous of something more Feng Shui, less distracting, more soothing to the eye — ah, more free chips and salsa have arrived. Innumerable bonus points for that. Four flour tacos with steak, Chihuahua (a soft, mild white cheese), caramelized onions + poblanos, pineapple salsa and corn salsa is the elite order. Several more bonus points for serving drinks in Mason jars.

So there ya have it, the knowledge that only experience brings. Use it well.