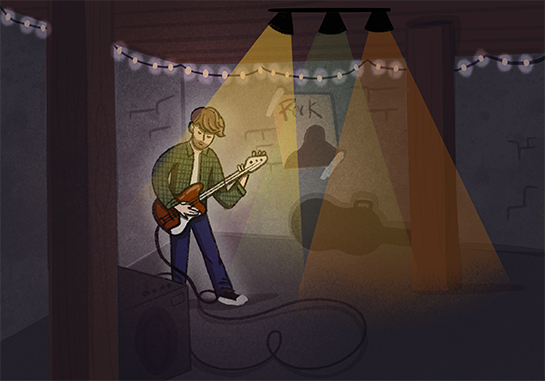 Many people who were interested in music during the ‘90s in Kent would gather at Heartbeat Records, one of two record stores during this time. This place, owned and run by Chuck Retzen, had lots of different ways to access music, whether that be vinyl records, cassettes or CDs. Chuck himself became a role model to many for his knowledge of music and genuine interest in the people who would gather around him.

Kevin Coral explained how Chuck always knew what kind of music to give people, even if they did not know they wanted to listen to it. He would always say, “‘oh, you are going to like this’ and I did 99% of the time.”

Kevin was part of the crowd that would hang out around the record store, talking to Chuck and everyone who hung around. Kevin was there so much that Chuck decided to teach him how to run the register; that way, he did not have to be there constantly. Kevin was the first, and only, employee to be a part of the store. While the record store was a place for him to work, it also became a place that would launch his music career.

One day when going through the local music section, he found a cassette by the band Indian Ropeburn. Flipping over the cassette, “I saw on the back of the cassette label that there was an address and it was right downtown here,” Kevin says. “I just went and knocked on the door.”

This studio became another place where he would hang out, to soon enough to start producing and working on music. He did not start to create music until he bought his first guitar from a thrift store when he was 21. “I wasn’t like a teenager where I was trying to play hot riffs,” he says. “I was immediately doing Lou Reed songs, because I wanted to figure out how to write songs.”

Mike Z., a bassist who lived in the same dorm as Kevin, started to make music with him. Mike became the first person to join the new band, Witch Hazel. They put ads in Heartbeat Records in hopes of finding people interested, but in this case, it was more difficult due to the type of music they wanted to play.

Kevin found shoegazer music, which is a subgroup of indie and alternative rock, that sounds like a mixture of ethereal-sounding music. This music was bigger in the United Kingdom but had not reached the United States quite yet, so finding people who were interested was harder.

The music scene in Kent during the ‘90s was different than typical ‘90s pop. “People were influenced by the entirety of the history of music up until that time,” Jason Prufer, author of “Small Town, Big Music: The Outsized Influence of Kent, Ohio on the History of Rock and Roll,” says. “Pulling from different genres, different ideas and creating music based on that.”

Witch Hazel started to create their own music, and when it came time to release their first single, “Just Don’t Try,” they pressed it themselves and released it under the name Bubblegum Smile. Sending the seven inch single out to many different people, especially throughout the East Coast, got their name out there more. “Just Don’t Try” was reviewed in the April 23, 1994 issue of Billboard, saying “Witch Hazel delivers a unique sound that is cool, tough and pure.”

After this single came out, they released their first album, “Landlocked,” after being signed to Flydaddy Records in 1995. Three years later, Witch Hazel came back, changing their name to Witch Hazel Sound and releasing their second album, “It’s All True,” with the Australian label Camera Obscura.

During this second album, C.C. Sheehan joined Witch Hazel Sound, playing guitar, keyboard and singing background vocals. Since the shoegazer music was not very popular, they did not play around Kent. They ended up playing in Cleveland, Chicago, Chapel Hill, North Carolina and a music festival in New York City called CMJ Music Marathon.

CMJ was put on by the College Media Journal, which had different venues for bands to perform throughout the weekends in the fall. Witch Hazel Sound and Sheehan’s other band, All Golden, were supposed to go in 2001 and perform the weekend of September 12-13.

When 9/11 happened, they were still at home, getting ready to leave for New York the next day. As the news of the attack broke, saying at first it was an accident, they were all shocked. When the second plane crashed and news developed, it became more clear of what was happening.

“It took me about three hours to process, ‘wait, I was supposed to go to New York,’” Sheehan says.

About a month later, Sheehan ended up going to New York for a show with All Golden, and parts of the city were still smoldering. Getting off of the subway, the band walked seven blocks without saying a single word. It was completely silent.

CMJ that year was right before Witch Hazel Sound released their third and final album, “This World, and Then Fireworks” with the record label Parasol. The third album ended up not selling well,  and Witch Hazel Sound fizzled out in the early 2000s.

Other than creating music with other artists and making different remixes, Kevin was in a band for a few years after Witch Hazel Sound called Torrey Canyon Ltd., but it did not last very long. Now, he works with Sheehan again in their new band, Future Children.

Future Children first started when Kevin reached out to Sheehan to work on some music, but after stripping away the music and trying to restructure it, they realized it needed vocals. The band itself has been together for a few years, working on different remixes, as well as their own music, to maybe one day release music as well as do live shows.

For now, they practice in the basement of Kevin’s house in Kent. Sheehan on the keyboard, Kevin also on the keyboard, Malcolm on guitar and Josh, who creates music on Ableton, a digital music production program.

There is a mattress up against the back wall, along with egg carton material on pieces of board on the other two walls. Instruments not being used, such as a drum set, different guitars and keyboards, throughout the room, against the wall, on a platform. Cords lay on the floor, attached to many different soundboards, instruments and speakers. A flashing light of red, green, blue and white shines on Sheehan as they play.

They work together, playing through the whole song and in the end, making different comments about how they think it turned out. Each person moves to the music, whether that is through swaying like Sheehan, bopping their head like Kevin, or tapping their foot.

Kevin, when he is not making music, works at Last Exit Vinyl House. He calls himself an “overqualified” store clerk, as he puts away the records, making different decisions about what should be in the store and where everything fits in.

“The reason I work at the record store is because it gives me time to work on music,” he says.

When walking into Last Exit Vinyl House, you would never know that Kevin was a successful musician back in the ‘90s and now. The sweet, summery sound of Beach Boys blast over the speaker as Kevin sings along under his breath, tapping his fingers on the vinyl records to the beat. Kevin, while working at the Vinyl House, can continue to work on his music, whether that is through the band, producing or working with other artists. Music is one of the biggest parts of his life, and always will be.

Writer Meets Therapist
“We All Wanna Die, Too”: Nina’s Bite-Sized Thesis (Part I)