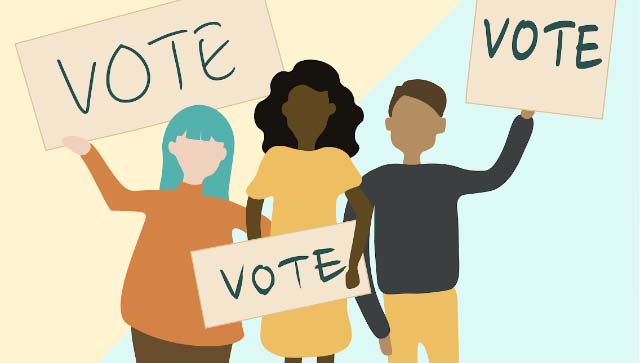 The General Elections are rapidly approaching, however, there are still a lot of questions and worries about the best way to vote. Safety concerns due to the pandemic are leading more voters to request absentee ballots, rather than voting in person. As of September 16, Secretary of State Frank LaRose reported that more than 1.3 million Ohioans have requested absentee ballots, double the amount of absentee ballots requested in the 2016 elections.

However, recent cuts to the United States Postal Service have also led to concerns about the validity of mailing in absentee ballots in time to be counted. LaRose and Ohio Governor Mike DeWine have both said that voting by mail is safe and effective.

These factors have made registering college students to vote more difficult this year, says Ethan Lower, Director of Governmental Affairs for Undergraduate Student Government. He heads Kent State Votes, an initiative working toward fostering civic engagement in college students. One of their main projects is helping students register to vote, a job that normally entails volunteers interacting with students on campus.

“The normal restrictions of the pandemic and the health safety guidelines are certainly impacting our voter registration efforts, but we’re already completely virtual,” Lower says.

Kent State Votes is pushing forward with outreach programs sharing voting resources via email, text and social media campaigns. They are also working to solve another problem the pandemic has created: a lack of poll workers. Poll workers are typically older people, more at risk for COVID-19. Kent State Votes is helping young people sign up to fill their shoes.

College students typically vote at lower rates compared to other age demographics. The United States Census Bureau found that voters ages 65 and older reported a turnout rate of 70.9 percent in 2016, while voters ages 18 to 29 only reported 46.1 percent.

Lower says there is a certain amount of skepticism young people have in democratic institutions that leads them to not vote.

“A lot of people may not feel like the system is built for them. There’s some kind of apathy among college students. It can be exhausting. It can be difficult to find your place in politics.”

Additionally, college students face voter suppression tactics, such as moving polling locations and issues registering to vote with college addresses. A fear of trusting the USPS to deliver absentee ballots on time is also contributing to this. However, Lower believes that a lack of information about voting is the ultimate hurdle young voters must cross.

“There’s different ways to vote and learning about those options, there really isn’t a person who’s waiting to teach you that. Sure, we talk about voting, but what that actually looks like for your situation might be unique. So learning that for the first time is the biggest problem that college students face,” says Lower.

Kent State Votes attempts to face these problems head-on by providing information and resources to young voters. The newest initiative they are launching is called TurboVote, a tool created by Democracy Works with the aim of bolstering confidence in voting with election information.

Lower is also trying to include people who may not be able to vote in the upcoming election in Kent State Votes efforts.

“As young people we are able to defy the odds and say, ‘Hey, you expect us not to vote. We are going to turn out for this election,’” Lower says. “We do have a political voice, and people worked really hard to earn that for young people.”

The voter registration deadline to vote in the November 3, 2020 General Elections in Ohio is October 3. This is also the deadline to update voter registration. Registering to vote and updating voter registration in Ohio are both available online through Secretary of State Frank LaRose’s website. To register to vote online, you need an Ohio driver’s license or Ohio identification card, name, date of birth, address and the last four digits of your Social Security number. The website then takes you through the process of registering. If any problems arise, contact the board of elections in the county you are registering in.

To vote by mail in Ohio, voters must first request an absentee ballot. The form is downloadable on LaRose’s website. The form asks for name, date of birth, address you are registered to vote, some form of identification (Ohio driver’s license number, last four digits of your Social Security number or copy of a current identification and valid photo identification) and the election you would like to vote absentee. After providing this information, voters simply have to mail the form to their board of elections. Absentee ballot request forms must be received by the board of elections by October 31.

Local boards of elections will start sending out absentee ballots on October 6. LaRose and other government officials are recommending voters send in their absentee ballots as soon as possible. If you don’t want to mail yours back, you can drop it off at your board of elections, either in person or in the dropbox.

Each board of elections also offers ways to track your absentee ballot.

There are two options if you want to vote in person: early voting or voting on Election Day. To vote in person you need to present one of the following forms of ID:

The early voting period for this election runs from October 6 to November 2. Visit your board of elections website to see their hours for early voting and location.

On Election Day, you can find your polling place online or by calling your board of elections.

Masks are strongly recommended when voting in person. If you do not bring one, you will be offered one. If you refuse, you will be asked to vote curbside. In a statement, LaRose said, “No one will be denied their right to vote.”

Abigail Bottar is a junior at Kent State University. She is pursuing a major in political science with a concentration in American politics and minors in history and women’s studies. This is Abigail’s third semester working for The Burr and first as copy desk chief. She also is an intern at WKSU. In her free time, Abigail enjoys going to Trader Joe’s, rewatching “Gilmore Girls” and reading. You can follow her on Twitter at @AbigailBottar to see more of her work.

Artists Struggle As Coronavirus Takes Toll On Music, Touring Industry: How Fans Can Help
The Reframing of Sylvia Plath and former Guilty Pleasures