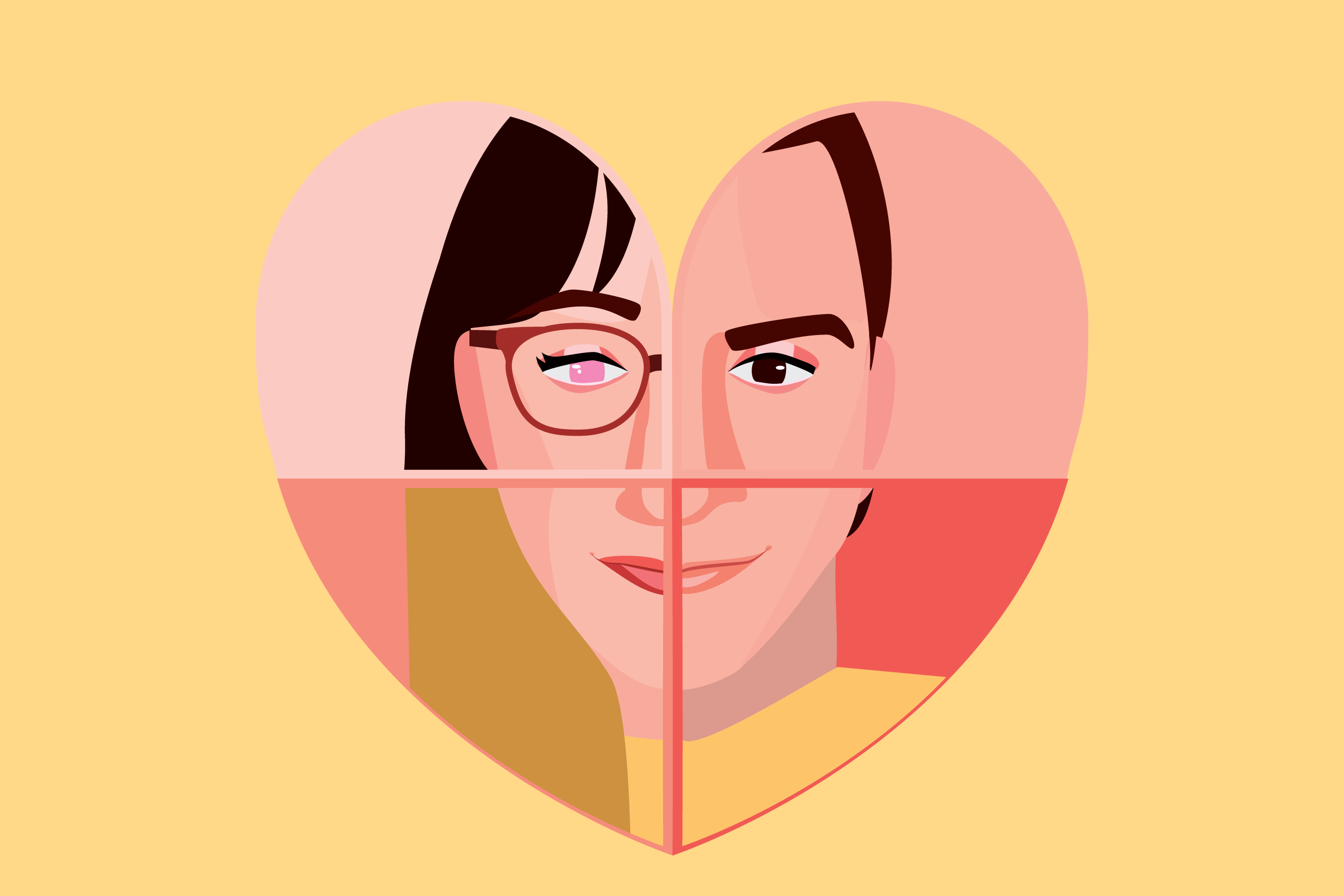 Since it first aired, “Friends” has remained the powerhouse of sitcoms everywhere. Everybody at least knows of “Friends” and has stumbled upon an episode or two, even if they haven’t watched the entire series already. With 10 seasons and a loyal fanbase, “Friends” has truly made its mark on pop culture and the entertainment industry. It was one of the first shows to revolve around a group of young adults living together. The show aired over 20 years ago at a time where most sitcoms revolved more on family household relationships or work/life. It’s not surprising that “Friends” became so popular so fast and is a timeless classic.

Once again: spoiler alert. This one’s packed with a lot of them.

The show explores the lives of a group of friends living in New York City — Ross, Rachel, Chandler, Monica, Phoebe and Joey. While there are many storylines explored throughout the 10 seasons, one of the most prominent ones is the turbulent romance between Ross Geller, who is played by David Schwimmer, and Rachel Greene, played by Jennifer Aniston.

Ross and Rachel are commonly known throughout popular culture as Roschel for their on-again, off-again — or perhaps better known as a “will they/won’t they?” — relationship. As a fan of “Friends,” I always admired Ross and Rachel’s romance and rooted for them to get together in the end. After 10 seasons of comedy and drama, myself and other “Friends” fanatics were rewarded with that famous line: “I got off the plane.”

Of course I’m referring to Ross running after Rachel to the airport where she is about to board a plane to start a new life in London. After he catches up to her and confesses his love, despite her feelings, Rachel turns him down and boards the plane. It’s only after when he goes back to his apartment, it is revealed that Rachel got off of the plane, met up with Ross and confessed that she is equally as in love with him.

Thank God for this touching moment, because for a second there, it seemed like these two would never get it right. In my opinion, Ross and Rachel’s lesson is that sometimes love is worth waiting for — even if it’s difficult. However, I will say, although that may seem like a term of endearment, Ross and Rachel were really toxic. I could list out so many things about their relationship that were normalized but, in actuality, were really bad.

Although I will defend the couple and adore them together, one thing the show did was make it seem like they needed to be together, or they would have nobody else. While the pair did explore other relationships while they were apart (which was every season except one), none of those lasted and fell short compared to the relationship Ross and Rachel had. The fact that they are — as the show refers to them — “each other’s lobsters” is a sweet and romantic gesture, however, it’s telling viewers that there isn’t anybody else to make them happy. Sometimes, we get carried away with great love and don’t realize all of the other types of love that can come into our life.

Another big thing for me is the whole “we were on a break” fiasco! I can’t even get into that or the debate behind which party was right or wrong, but I will say from personal experience that holding something over someone’s head for years (or in this case, 10 seasons) is a bit much …

All of these elements lead me to the second couple I want to address here, Nick Miller and Jessica Day.

Nick, played by Jake Johnson, and Jess, played by Zooey Deschanel, are main characters and loft roommates in the popular comedy series “New Girl.” This show is the reason why I want to delay domestic, family life and live in a loft with my friends until my thirties. I’m not kidding.

Anyways, for those of you unaware, Jess moves into a loft she finds on Craigslist and her roommates are three guys: Nick, Schmidt and Winston. For a while, there was another roommate, Coach, and then Jess’ best friend Cece moved in after falling in love and getting engaged to Schmidt.

The story of Nick and Jess is a lot like Ross and Rachel. They are yet another in the long list of “will they/won’t they?” television couples. Much like Ross and Rachel, Nick and Jess meet in a circumstance that, from the first episode, communicates to the viewers that they will most likely be together or at least be in a romantic relationship at some point during the show. For example, in the pilot of “Friends,” Ross is seen sitting at Central Perk saying, “I just want to be married again” after his marriage to his first wife fails. Immediately after, Rachel’s character is introduced walking into the cafe in a wedding dress. Similarly, Nick and Jess meet when Jess is being interviewed by the loft roommates, and she is talking about her difficult breakup, which is the reason she needs a new place to stay. It is revealed that Nick is also going through a tough breakup with his longtime girlfriend, Caroline.

Also like Ross and Rachel, Nick and Jess’ friendship is filled with sexual tension and leaves the audience wondering when they will finally get together. They start dating at the end of season two, but by the end of season three, they are already broken up. Much like the other couple, they enter various other relationships and go back-and-forth with their tension after dating and trying to just be friends again.

One of the stark differences between the two couples, however, is that Nick and Jess are actually rooting for each other in their other respective relationships. Ross and Rachel, despite their seemingly soul mate connection, lash out at each other and often do not seem happy when they are in other relationships and resort to jealousy. As for Nick and Jess, the two of them try to get past their complex emotional obstacles by truly trying to be happy for the other, even if they secretly still harbor feelings.

Nick and Jess do this so well that it leaves “New Girl” fans wondering if they even are getting back together and ponder if they are better off in other relationships. In season five, Nick meets Reagan, a medical sales representative who moves into the loft while Jess is sequestered for jury duty. Undoubtedly, Reagan is his other serious relationship in the series, and although Jess comes back and realizes her feelings, she is jealous. Yet, she still lets the two be happy together, because she believes this to be the best for Nick.

One thing I admire about Nick and Jess is how, throughout their relationships with others, they realize things about themselves that they need to fix. The pair didn’t work out in season three, because, for lack of better words, they didn’t have their shit together. Nick was a bartender with no bank account, and Jess was going back-and-forth between jobs and at least thought she had her shit together more than Nick but not that much.

Only when the two sorted out their personal issues (often in other relationships) all the while maintaining their close friendship do they finally become the best versions of themselves.

At the end of season six, Nick accepts a meeting with a publisher for his book, “The Pepper Chronicles,” and Jess is promoted to her dream job, becoming a principal. Only then, when they are at the best versions of themselves and achieve their personal aspirations, do they finally come together and the timing seems right for them to start dating again.

To jump back to “Friends,” what I don’t like is how Rachel was forced to leave her dream job in order to stay and be with Ross. Although the writing of the show seems as if she needed to pick one or the other, what I enjoyed more so about Nick and Jess is how they both achieved their dreams and by then could finally get together. It reminds me of the age-old saying, “You can’t love someone until you love yourself.” For me, Nick and Jess truly got this concept and loved who they were and only then did they start to understand how to love the other person.

While there are many couples that relate to this ‘will they/won’t they?’ trope, I feel as if “Friends” and “New Girl” started a generational pull toward their two respective couples that is unlike any other I’ve seen on television.

We can debate over which one is better, but I’d rather leave this on a note that each couple is unique and their complexity is what makes them so entertaining to watch and follow — even for various seasons when they aren’t together. You have to admit, it makes it all the better when they actually do get together in the end.