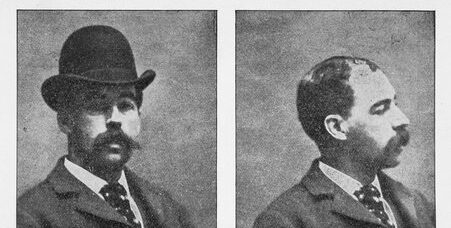 The FBI estimates that only 1% of the population are serial killers. The American Psychological Association defines a serial killer as “an individual who repeatedly commits a series of murder, typically with a distinct pattern in the selection of victims, location and method.” Who was America’s first serial killer? Britannica describes H.H. Holmes, born Herman Mudgett,  to be the first known serial killer in the United States.

Holmes was born in 1861 in Gilmanton, New Hampshire. His crime life began with frauds and scams. According to Biography.com,“as a medical student at the University of Michigan, Holmes stole corpses and used them to make false insurance claims. Holmes may have used the bodies for experiments, as well.”

In 1885, Holmes moved to Chicago where he worked at a pharmacy and began using the alias Dr. Henry H. Holmes. Eventually, Holmes took over the pharmacy, and it is believed he may have killed the previous owner.

Holmes’ property was known as the “murder castle” and is said to have contained trap doors, gas chambers and even a crematorium in the basement. However, History says that according to Harold Schechter, author of “Deprived: The Definitive True Story of H.H. Holmes, Whose Grotesque Crimes Shattered Turn-of-the-Century Chicago,” “It’s my belief that probably all those stories about all these visitors to the World’s Fair who were murdered in his quote-unquote ‘Castle’ were just complete sensationalistic fabrication by the yellow press.” This means it is likely that the press at the time exaggerated the features of Holmes’ property simply to attract attention.

Holmes continued his schemes with his associate Benjamin Pitezel. The two concocted a plan where Pitezel would fake his own death to collect the life insurance money. Holmes ended up being jailed for a different fraud and admitted to his fellow inmate that Pitezel’s death was just a scheme. His inmate, Marion Hedgepeth, later revealed Holmes’ confession to authorities, according to Biography.

Before authorities could get to Holmes, he killed Pitezel and convinced his wife to let him travel with three of their children who he later killed as well.

Holmes was eventually caught in 1894. It is said that Holmes killed between 20 and 200 people during the time the World’s Fair was in Chicago. Holmes would often take the time to build a relationship with a woman, marry her, and then kill her after securing her finances. Most of his victims were people who stayed at his property, which he opened up as a hotel for some time. However, History.com reveals that statistic may not be entirely accurate. Adam Selzer, the author of “H.H. Holmes: The True History of the Whit City Devil,” says in the article, “he confessed to 27 at one point, but several of them were still alive at the time.” Exaggerated retellings of the story likely caused the real number to become inflated.

H.H. Holmes was hanged for his crimes in 1896 in Philadelphia.